Michael is certainly known as one of the city’s most passionate hometown sports enthusiasts with a long history of supporting Chicago’s teams. One of his favorite memories is sitting courtside with his father for Michael Jordan’s last home game at the United Center; Game 5 of the 1998 NBA Finals.

As a true fan throughout the years, he has stood by Chicago’s teams not just through the highs, but the lows as well. He will never forget witnessing the infamous “Bartman” game at Wrigley Field from the first row behind home plate. Like many fans, watching the team falter from an eighth inning 3-0 lead to lose game six (2003 NLCS versus the Florida Marlins) was devastating. The loss of game seven – and crushed hopes of Chicago winning the first World Series since 1908 – were discouraging, to say the least. Despite the Cubs’ woes, Palumbo’s loyalty remains completely undaunted.

Always the cordial host, Mr. Palumbo personally brought 40 friends, family, colleagues, and associates to the Bears’ Super Bowl appearance with the Colts in 2007. The group included his father and two sons, who are also passionate sports fans.

In addition to supporting Chicago’s sports teams, Mr. Palumbo is also a great fan of the Olympics, traveling with his family to the past two summer games. Highlights include the 2008 games in Beijing and attending the past two gold medal basketball games (with the United States defeating Spain in both instances).

Mr. Palumbo attributes his love of sports to his own competitive nature, in addition to appreciating the discipline required to become a world-class athlete. Perhaps more importantly, his true love and enjoyment of sports comes from watching various games with his father as a child. 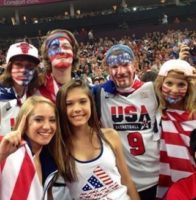 Michael Palumbo and Family at Olympics 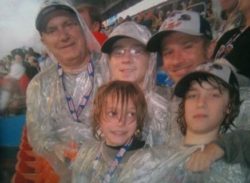 Michael Palumbo with Father and Sons at Superbowl